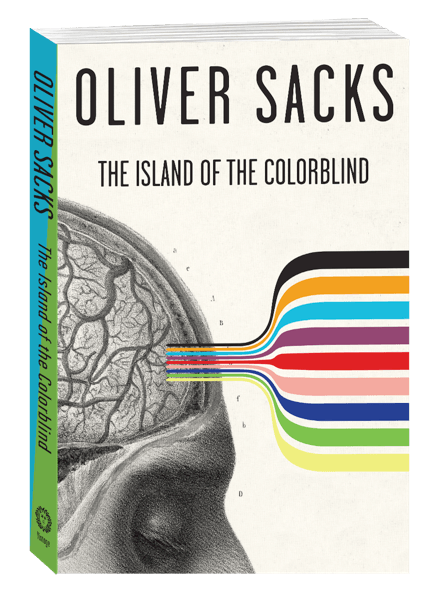 The Island of the Colorblind

An exploration of a society with congenital colorblindness, this book is a meditation on islands and the strange neurologic malady on Guam which resembles Parkinsonism and Alzheimer’s.

The Island Of The Colorblind

“Here, as in Seeing Voices, I was concerned not only with individuals, but with whole populations; thus, I felt as much an anthropologist as a doctor when seeing the impact on the chammoros of a terrible neurodegenerative disease in Guam, and of a hereditory total color-blindness in the tiny coral atol of Pingelap. But these two little books often broke away from the purely medical, and became journals of travel and enchantment in the tropical islands.” —Oliver Sacks

Oliver Sacks has always been fascinated by islands–their remoteness, their mystery, above all the unique forms of life they harbor. For him, islands conjure up equally the romance of Melville and Stevenson, the adventure of Magellan and Cook, and the scientific wonder of Darwin and Wallace.

Drawn to the tiny Pacific atoll of Pingelap by intriguing reports of an isolated community of islanders born totally colorblind, Dr. Sacks finds himself setting up a clinic in a one-room island dispensary, where he listens to these achromatopic islanders describe their colorless world in rich terms of pattern and tone, luminance and shadow. And on Guam, where he goes to investigate the puzzling neurodegenerative paralysis endemic there for a century, he becomes, for a brief time, an island neurologist, making house calls with his colleague John Steele, amid crowing cockerels, cycad jungles, and the remains of a colonial culture.

The islands reawaken Sacks’ lifelong passion for botany–in particular, for the primitive cycad trees, whose existence dates back to the Paleozoic–and the cycads are the starting point for an intensely personal reflection on the meaning of islands, the dissemination of species, the genesis of disease, and the nature of deep geologic time. Out of an unexpected journey, Sacks has woven an unforgettable narrative which immerses us in the romance of island life, and shares his own compelling vision of the complexities of being human. 📷 Photo by Sanne De Wilde, Noor. The Belgian photographer's 'Island of the Colorblind' exhibition documented the achromats of Pingelap and the neighboring island of Pohnpei.

Praise for Island of the Colorblind

“An explorer of that most wonderous of islands, the human brain… Oliver Sacks also loves the oceanic kind of islands… Both kinds figure movingly in this book–part travelogue, part autobiography, part medical mystery story–in which Sacks’s journeys to a tiny Pacific atoll and the island of Guam become explorations of the time, and the complexities of being human.” —D.M. Thomas, The New York Times Book Review

“As a travel writer, Sacks ranks with Paul Theroux and Bruce Chatwin. As an investigator of the mind’s mysteries, he is in a class by himself.” —Publishers Weekly

“Dr. Sacks conjures up his subjects’ lives with enormous compassion and insight, writing simultanteously as a doctor and metaphysician, scientist and father confessor.” —The New Yorker A trip to see ferns in Mexico with a group of fellow fern enthusiasts turns into a meditation on Mesoamerican civilization,chocolate, agriculture, mescal, and amateur naturalists. Sacks explores some of the most fundamental facets of human experience–how we see in three dimensions, and how we represent the world internally when our eyes are closed.